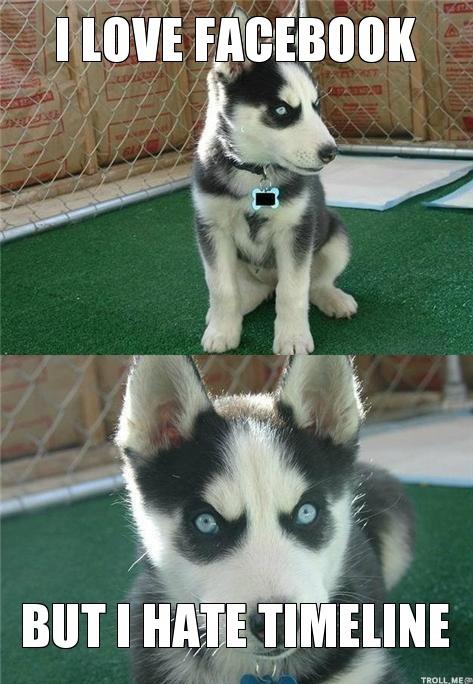 Just in case you didn’t notice all the ruckus in your news feed: all Facebook users have been switched over to the timeline profile display.

Laments that I’ve noted have include this heated conversation:

The thing is, I’m not sure how Facebook could have updated their interface in any more of a user-friendly way. They first introduced timeline in December 2011, making the switch optional and giving users a seven-day “preview period” during which you could tailor your new content without anyone else seeing it. They also provided a click-through demonstration to help you learn how to use it as well as their standard “Help” section.

I decided to switch over pretty early because a) nothing could be worse than how my profile presently functioned and, b) Facebook made it pretty clear that this was going to be the new standard eventually. After all, why would they keep up the resources to maintain the old style with its dead white space and lack of infinite scrolling? I mean, Facebook had to update its site just to keep up with the dynamic features of newer social networking rivals (hello Google+). Note how the layout of your Wall is now a lot like Pinterest with colourful features in scrolling columns – sleek. And while I’m exposing my bias in favour of the new profile display, I should mention that I find this set-up much more intuitive than the previous version when it comes to editing information, changing security settings (which you can now tailor for EVERY chunk of info) and even just adding a new profile picture.

However, liking the new display is simply a matter of opinion. Regardless of whether or not timeline is actually better than the old profile set-up, why is there so much pushback every time Facebook makes a change? People have said it’s because they’re not informed about it before it happens, well this time they were. They’ve said it’s because they don’t know how to use it, well now there’s an interactive tutorial page. They’ve also mentioned that it’s because there are still problems – yes, but how can Facebook ever hammer out the problems if they’re not even allowed to make incremental changes?

While I haven’t heard many people actually say this, I think one of the most convincing arguments for disliking changes to Facebook is that the company is changing something we consider to be “ours”. It’s YOUR profile, you’ve tailored it and it says something about you. However, the truth is that your profile belongs to Facebook; it’s a service and you’ve simply tailored your information in the boxes provided. That is literally more apparent in the newest version. Perhaps with something we’ve so intricately created to be about ourselves, it’s difficult to realize that we are not really able to colour outside the lines. These expressions of our identities are only ‘unique’ at face value when really we are all limited by the same structure and everyone’s profile is basically the same.

When providing a social networking service to the masses, I’m not really sure if this is a problem that can be remedied. I’ve heard it proposed that people should be able to code their own profiles, though it is rare to find people outside of the IT world with the skills, time and dedication to carry this through. If in some future state of the Internet, coding languages become common knowledge and we all decide to purchase servers and construct our own custom social sites, there may be profit in a service that finds a way to link all of these truly unique sites so that we can engage in networking activities through them. But that seems like an alternate online universe far from the one we presently inhabit…

For now, maybe the next step will be for Facebook to go further with the idea of user customization. It may benefit them to implement a set-up that resembles SharePoint in providing the user with the ability to pick and choose among pre-coded web parts (e.g. a calendar feature, an announcements feature). This is similar to the way Facebook users can customize their apps, except it would apply to the very foundations of one’s profile. In essence, you could have a blank profile, you could do away with any mention of “Friends”, or you could discard the cover photo space. Along these lines, users are also often partial to picking from a diversity of ‘themes’, such as the packaged designs you can pick with your WordPress or Tumblr.

So maybe that’s it Facebook, perhaps people are simply looking for a way to have greater control over something that they pour so much of their lives into. It’s a hefty demand for a free service to cater to, but maybe in light of the emerging competition it’s not too much to ask.