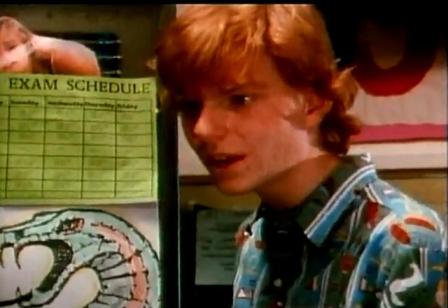 (Image courtesy of the Degrassi Wiki)

Let’s travel back to a formative time when I used to come home after school every day and watch reruns of the original Degrassi Junior High – a Canadian-made TV drama about tough teen issues. An episode* halfway through season three stands out: one of the main characters, Snake (they had great nicknames in the late ’80s) has an older brother named Glen who is away at med school but comes back home to tell his family he’s gay. In an intense coming out scene, Glen tells Snake he’s moving in with a guy who is gay and Snake reacts by saying, “What are you living with one of those for?” And then when Glen explains that he’s gay too, of course Snake doesn’t react well. The rest of the episode tracks Snake’s process of coming to terms with his brother’s identity. At the end, we see Glen, having just been kicked out by his parents, driving off into the sunset after letting Snake know he’ll return “when I’m welcome.”

The whole thing is pretty heart wrenching. Admittedly, the episode is from a time when things were quite politically different in Canada than they are now. Degrassi was actually pretty progressive for its time, intertwining a subplot about AIDS into the episode to educate viewers that you can’t contract the disease from shaking hands and that heterosexual people can transmit it too. Today in Canada, this type of episode would be overly dramatic. Same-sex marriage has been legal for more than a decade and there are at least 8 LGBT characters in Degrassi: The Next Generation – the present-day version of the show. However, that’s not to say I haven’t seen herds of protesters on Parliament Hill during LGBTQ Pride festivals who would like to see the Civil Marriage Act repealed. Also, marriage is just a start and individuals with non-mainstream gender and/or sexual identities still face many challenges to their rights and well being. LGBT teens still experience higher rates of depression, more bullying, and are more likely to commit suicide than their heterosexual peers (Almeida et al., 2009). Rights for people along the gender spectrum (e.g. trans, genderqueer, agender) are also still in an early stage, often with a lack of support, resources, funding for medical attention, and barriers to changing one’s gender identity on legal documents.

I’m telling you all this not only because I think Degrassi needs to foster more edgy, progressive plot lines again but mainly because I want to discuss the continued importance of coming out. In political movements throughout history, such as the ‘gay liberation’ movement that arose in the 1970s out of the Stonewall riots, coming out was seen as a way to liberate oneself from discrimination and to challenge others’ perceptions of homosexuality as something that is evil or an illness (Jagose, 1996). This is apparent in the old Degrassi episode’s narrative: Glen has to come out to be true to himself and he also makes Snake think twice about his prejudice against gays. This is not to say that coming out is a magic bullet or that it’s always necessary or even always possible (this is much contested; e.g. Sedgwick, 1990). Putting pressure on individuals to come out has also been criticized as shaming closeted individuals when society is to blame for making the closet (see Warner, 2002). However, it remains a powerful idea that when individuals (voluntarily) come out, it can have an impact on their identity development and the views of people around them.

When Glen told Snake and his parents that, “Hey, I’m gay” it took some time, a lot of effort, and quite a bit of emotion. That was just the start of a whole process of coming out; as he goes back to med school, meets new people, and bumps into old acquaintances, he’ll have to go through it all again. Imagine if there was some way Glen could amplify his coming out to make it persistent but not ‘in your face’. Enter social media, with features that allow individuals to broadcast personal messages to multiple audiences (boyd, 2011). These days Snake is just as likely to watch Glen’s ‘coming out confession’ on YouTube or to see him take a #queer #selfie and post it to Tumblr or to notice that he’s sure talking a lot on Twitter about heading to Toronto’s World Pride Festival. This causes me to wonder, how can coming out or communicating non-mainstream sexuality in everyday ways using social media affect LGBTQ people’s identity development and self-perceptions?

But wait, there’s more: If there are hundreds of people posting videos and ‘coming out vlogs’ become a genre on YouTube, or if #queer #selfies are a daily presence in the Tumblrsphere, or if dialogues using Pride hashtags become so huge that they garner mainstream media coverage – can this accumulation of (fairly) personal coming out activities influence wider perceptions about gender and sexuality? As posts, exchanges, and information accumulates on social media, it forms “big data”, the aggregate of all our social traces. This big data could create big visibility that may put faces to the real-life struggles caused by hate and naivety, which may have the potential to shape perceptions and understandings of diverse gender and sexual identities.

Or, it could have little or no impact because, well, the Internet is mainly pictures of cute animals – don’t worry, Internet researchers have got that covered too.

Either way, it’s worth investigating, so onward with this PhD journey.

*Bonus – here’s the whole episode discussed in this post: