A really exciting project I’m working on this term is an analysis of Facebook’s Site Governance page and the voting and commenting process that takes place there. In fact, this is research YOU might be able to take part in, so head over here to check it out.

Part of my research includes looking at visual material found on this site. While there are not a lot of photos, a kick-off video featuring Mark Zuckerberg himself was posted back in 2009 and there is a recent recording of the Livestream Q&A that took place during the most recent user consultation process. These, along with an examination of the page layout and features constitute most of the visual data analysis material I’ll be using (in combination with documents, site text, and e-mail questionnaires).

Now, I won’t subject you to a full-out visual analysis session but I do want to try out some of the ideas I’ve been reading about in Rose’s (2007) book on visual methodologies. In particular, she set up a framework for approaching visual material that looks at three ‘sites’:

Then each of these can be examined through three different aspects or what she calls “modalities”:

Let’s use these criteria to have a look at the visual content of the Q&A while not yet tackling any of the informational content. Here’s a screenshot of the opening scene: 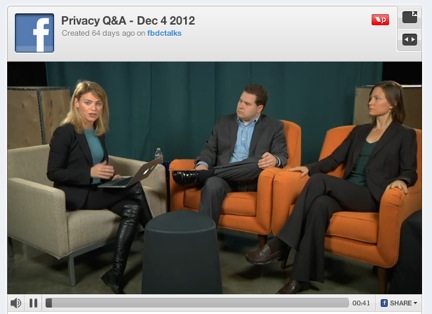 Some background: While it’s not present on the Site Governance page today, the copy of the site that I took a few weeks back using Evernote has the ‘status update’ explaining the situation. Rob Sherman (middle) from the Facebook privacy team and Katharine Tassi (right) from Facebook Ireland are being asked questions by Sarah Feinberg, Director of Policy Communications at Facebook (left) about proposed changes to the Data Use Policy and the Statement of Rights and Responsibilities – site policies that pretty much govern everything relating to users.

To simply give an excerpt of the larger analysis I’ll be doing, I’ll share just a few thoughts about one modality of each site:

1. The site of production – Technological Modalities

2. The site of the image itself – Compositional modalities

3. The site of the audience – Social modalities

Whew, well that’s enough analysis for now! Clearly, I’ve got a lot to delve into, especially once I start looking at the video alongside its audio content. Once again, if you want to help lend your perspective about the way Facebook is doing participatory governance, please visit my research page!

Also, check out the book for more details about this visual analysis methodology: